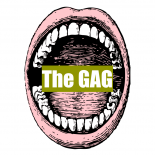 value the brain & cut the priviledge

Viewers new to Canadian artist Liz Pead’s work might, from a distance, be forgiven for believing that her mixed media textile drawings were instead executed in pen, or were perhaps even engraved prints on sepia-toned paper, rather than thread on woven copper mesh. Yet, it is precisely this unique combination of materials which makes Liz Pead’s work so powerful.

The Ontario based Pead’s latest series Stitched Landscapes are primarily monochromatic works, with small amounts of colour  judiciously inserted into certain pieces,  and are indeed constructed from thread sewn by machine onto woven copper mesh. The result is a series of images that are intimate and convey, with seeming effortlessness, the rough and wild beauty of rural landscapes ranging from across Canada and Scotland, all the way to Iceland. What is equally intriguing about this work is what Pead allows viewers to experience about what is behind her etherial landscapes. By ‘behind’, I don’t mean what went into the creation of the works but rather, literally, what lies on the back side. Pead’s choice to weave a copper-wire base for her drawings allows us the opportunity to experience a second-dimension of sorts in her work. We can see (both literally and figuratively) through the landscape to what lies on the other side. There, we see nature’s loose, connecting threads. We see areas where landscape appears to dissolve, breaking apart – a form of simultaneous composition and decomposition. 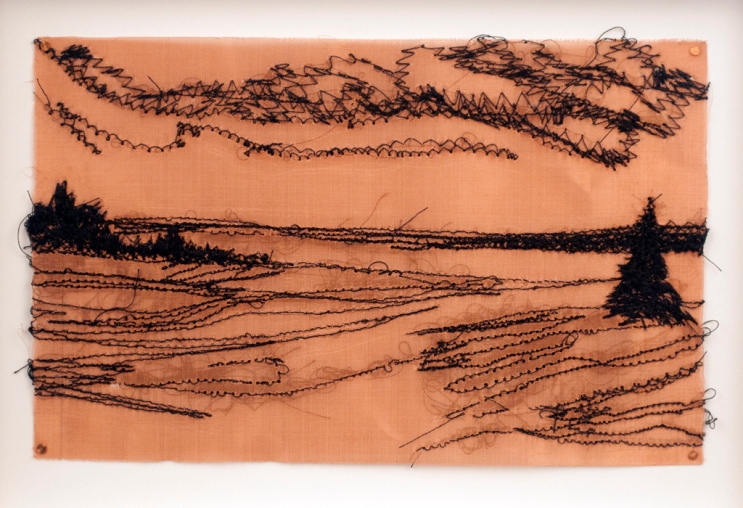 Well studied, Liz Pead began her formal visual arts training during the early 1990s at the New Brunswick College of Craft and Design. There she earned diplomas in both Fabric Surface Design, as well as in Textiles. By the spring of 2007, she’d also earned her Bachelor of Fine Art from the Ontario College of Art and Design with a Medal for Painting and Drawing. These days her studio is in the new Dupont and Symington artists’ enclave in Toronto, yet as dedicated as she is, she’s on the road a lot so you may or may not find here there working on a latest piece should one drop by unannounced.

It was the poet Walter Scott who first wrote the line, Oh, what a tangled web we weave in 1827, and funny as it may seem they cause me to think of Liz Pead today. As an artist and an avid hockey player, whether Pead is standing in on a skim of fresh ice and in front of a web of netting (eyes trained on a hockey puck that is moving back and forth below a tangled web of helmets, shin or knee pads, and skates), or she is in her studio weaving a delicate web of lines back and forth with her sewing machine across the surface of a thin sheet of woven metal, Pead appears to be constantly weaving. In all likelihood my line from W. Scott’s poem means little-to-nothing to Pead. However, in her roles as goalie for a number of Toronto area women’s recreational hockey teams, and of contemporary artist weaving complex images from nature’s landscape, Pead’s two passions are favourably, and decidedly,  ‘tangled up‘ with one-another.

In 2006 Liz Pead made her first mixed media painting using recycled hockey gear. She simply explains of that first piece, “I began making nests from hockey sticks, they needed trees and then the trees needed a world to live in.” Sounds easy enough, yet the piece itself is anything but. Apple Island – I am Just Under the Surface is a large mix-media painting that is mounted on board and likely weighs somewhere in the vicinity of a tone.

In the past Pead has shun references to any art historical ‘isms’ in her work. Nonetheless, one might choose to locate the lineage of her painting Apple Island as being of the Robert Rauschenberg, post-abstract expressionist, “combine” sort. What with the painting’s bright colours, strong gestural mark-making and inclusion of material objects from real life. It is of note that Robert Rauchenberg did not however paint landscapes, that territory is all Pead’s here. The image of Apple Island (also see Pead’s website) could additionally bring to mind early works by American neo-expressionist artist Julian Schnabel such as The Sea. His work, a landscape painting from 1981, it contains heavy marks made from paint and broken plates, in addition to other found materials but that is, however, where comparisons to American artists stop. Liz Pead’s painting is clearly a vibrant Canadian landscape, with clouds in Apple Island are depicted by white helmets & figure skates collaged onto the surface, and she constructed the landmass in the background from chopped hockey sticks. In the foreground, the painting has red trees which are surely ‘à la Tom Thomson’; works by the famous Canadian Group of Seven painter such as Soft Maple in Autumn, and Colourful Maples from 1914 or, Lake and Red Trees from 1916. Only in Pead’s version, those iconic red trees are constructed from hockey jerseys, padding, and bits of sliced hockey helmets. Finally, if you are Canadian and a hockey fan, the collage of skates at the bottom of Pead’s canvas brings to mind flailing arms, heads, legs and skates – think classic hockey brawl – the Montreal Canadians vs. Philadelphia Flyers pregame bench-clearing fight in 1987 or the all time classic fight during game four of the Stanley Cup Finals, the Boston Bruins vs. The Canadians, in 1978. The overall effect of Apple Island – I am Just Under the Surface is one of movement, and a very ‘Canadian’ sort of movement at that.

Pead has exhibited her work internationally. A large scale landscape work of hers, “Louis Riel and the Church at Batoche, 1885”, was at the visitors’ centre of the Parks Canada National Historic Site in Batoche, Saskatchewan in 2015 and is now permanently installed at the Sixteen Mile Arena Complex in Oakville, Ontario. She has been exploring landscape installation for years by painting using textiles as extended paint, and her level of comfort and authority with the materials is evident.

Liz Pead’s reverence for Canada’s esteemed Group of Seven artists is also clearly evident in many of her new works, such as the pieces Snow Fields (2015) and Sheffield, New Brunswick (2016) which evoke images from the ‘famous seven’ such as Arthur Lismer’s Island of Spruce or A. Y. Jackson’s Winter in Quebec (below). Interestingly, the beautiful stitchwork in Pead’s pieces such as Prodigal Pine (2016) also bring to mind the paintings of post-impressionist Vincent Van Gogh. I think of such pieces as Starry Night (1889), and Wheatfield with Cypresses (1889) where embroidered-like lines of coloured paint swirl and intermingle on the Van Gogh’s canvases. At times one might even consider a relationshilp between Pead’s aesthetic and certain works by Canadian expat Joan Mitchell and her large abstract expressionist pieces such as Girolata Triptych (1964) (a painting of France’s Gulf of Girolata). In that particular work by Mitchell, a dark voluminous mass hovers mid-composition while all around it, marks scatter and flick and lines of string-like strands fall out from the central focus area, ostensibly travelling out and off of the work entirely as with Pead’s thread work in Stitched Landscapes.

Islands of Spruce, by Arthur Lismer and Winter in Quebec, by Alexander Young (A.Y.) Jackson 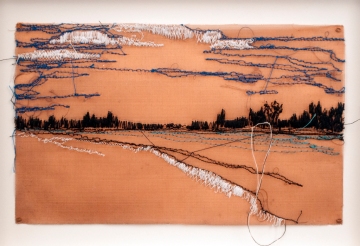 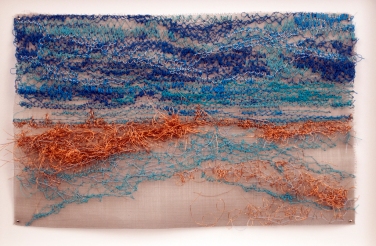 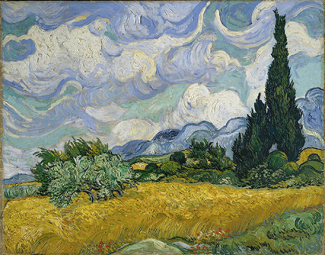 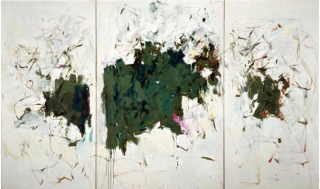 Works by American artists Sophia Narrett and Debbie Smyth share distinct, and contemporary affiliations with Liz Pead’s moving landscapes. Sophia Narrett, an artist currently doing a residency at the Museum of Arts and Design in New York City, creates stunning and organically shaped embroidered-paintings that feature a blending of interior and exterior narratives. When asked about her transition from painting to embroidery in a recent article for Frontrunner Magazine Narrett explained, “Looking back at what I was doing, I was looking for more of a material connection than I had personally felt with paint and with the rectangular image. But in the moment, it felt really spontaneous. Thread solved a lot of the problems I had in painting–formally. That is also why I ran with it. It forced me to slow down”. Artist Debbie Smyth also creates images with thread, however her approach is quite different from both Narrett and Pead’s. Where Narrett’s works are full of bold colours, and Pead’s paintings are somewhere in the mid-colour range, Smyth typically sticks to black in her imagery. Smyth creates large scale wall-drawings by nailing straight pins directly into the wall, then joining the ‘dots’ with black thread. Describing this work on her website, Smyth says, ” I feel as if I am taking thread out of its comfort zone, presenting it on monumental scale and creating an eye-catching, and in some case jaw dropping effect”. So, “slowing down the making process“, “looking for a material connection”, “moving materials out of their comfort zone”, these statements made by Narrett and Smyth could just as easily have come from the mouth of Liz Pead who, about her own work, says “my choice of recycled hockey gear was challenging even the idea of textile – which is often seen as feminine. Let me tell you, nothing about the ripping apart of hockey gear and getting it to stay where you put it is ‘feminine’.” Or perhaps rather, Pead’s work is challenging gendered-impressions of what ‘feminine’ can and/or cannot be in painting.

No Matter How Many Skies Have Fallen (2012) embroidery thread, by Sophia Narrett 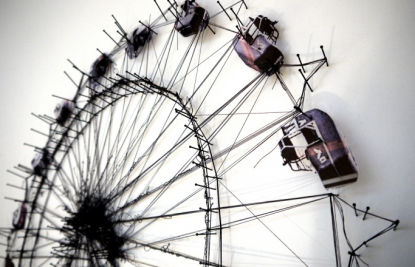 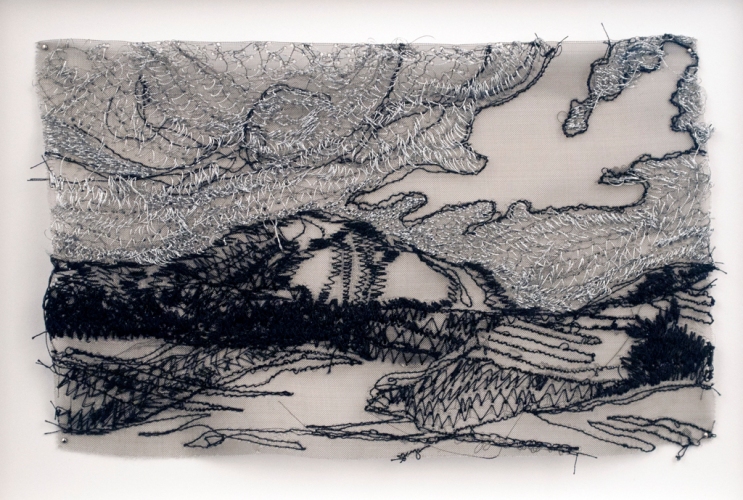 The last couple of years have seen Liz Pead spending time in Iceland, where the dramatic landscapes inspire her art as well as her passion for hockey. Her paintings can be found in the collections of each of Iceland’s three National Ice Hockey Arenas. She has attended residencies in Blönduós in Northern Iceland, studying traditional Icelandic materials, techniques and patterning, and workshops as far away as Scotland. She continues to live and work in Toronto. Look her up if you are in search of a dedicated goalie, or one heck of a landscape painter! 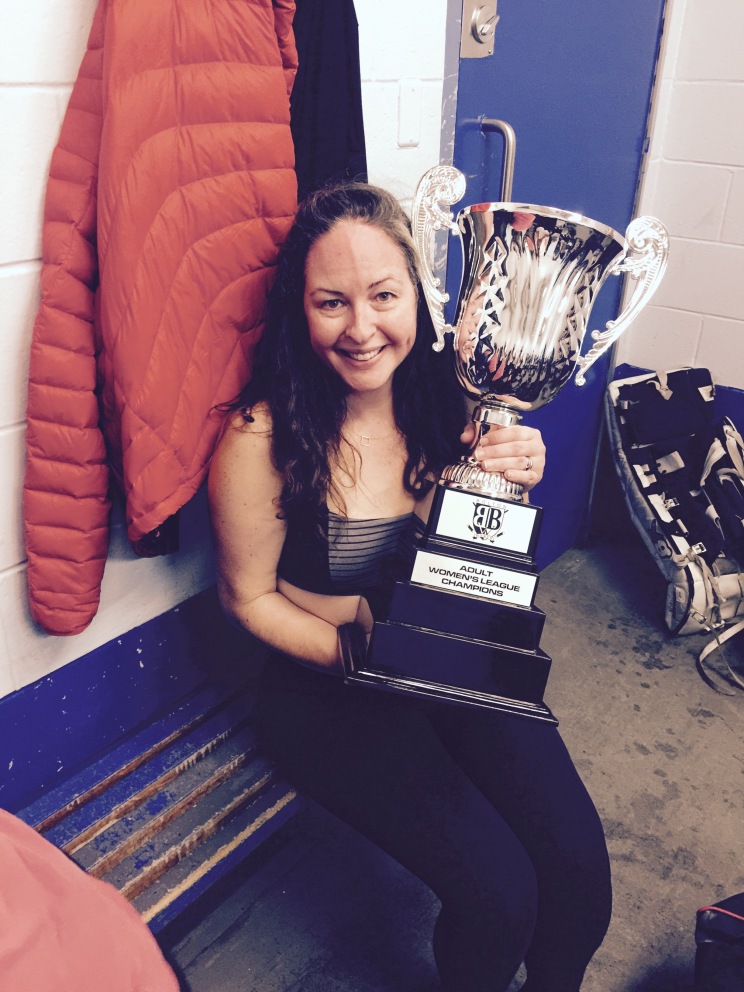 © Danielle Hogan, PhD candidate in Interdisciplinary Studies at the University of New Brusnwick, researching the feminization, and subsequent devaluing of ‘soft’ materials in contemporary art.